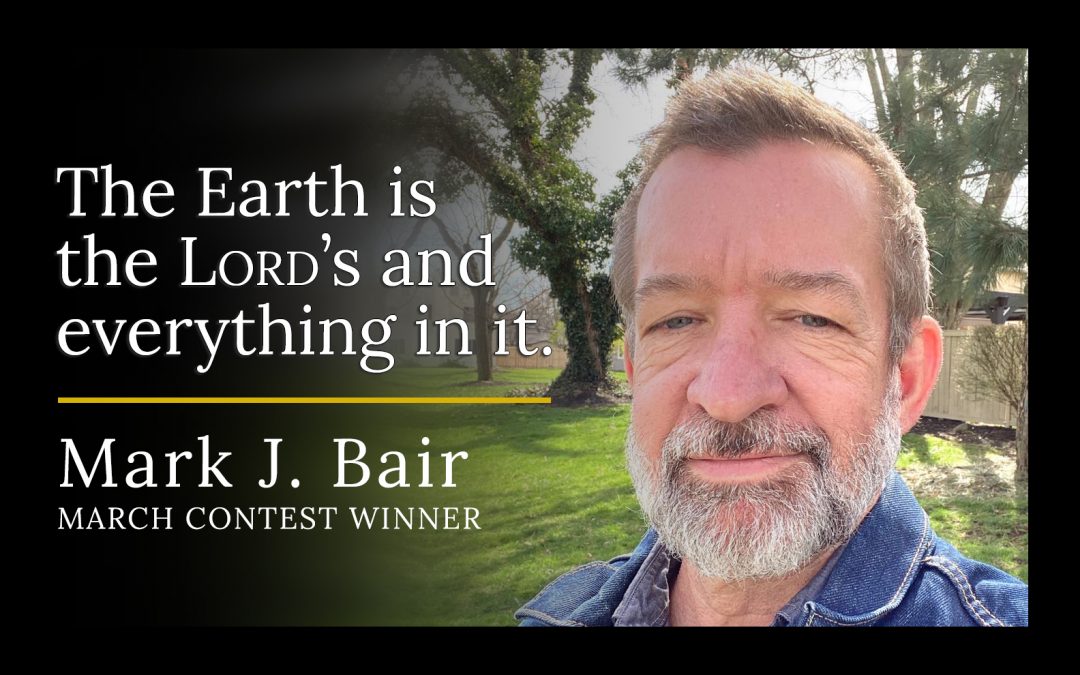 We were so impressed with the submissions to our March writing contest. Thank you to everyone who took a risk and submitted an essay.

We asked writers to craft an essay on the topic “The Earth is the Lord’s and everything in it.” Essays were judged by the quality of the writing, and by the organization and strength of the argument made.

The winner of March’s contest is Mark J. Bair for his submission titled “Tastes of Glory.”

Mark J. Bair is an author and photographer living in Columbus, Ohio. He’s the father of two children. Learn more about him at MarkJBair.com.

When we read this text, we rightly think of God’s ownership of the earth and ourselves, as well as his right to rule. In this essay, I will explore some of the ways the world God made calls out to us—his image-bearers. God’s earth is not a mere object with the appearance of design but a dynamic, radiant creation—pulsating with glory.

The heavens declare the glory of God;
the skies proclaim the work of his hands.
Day after day they pour forth speech;
night after night they reveal knowledge.

Notice that there’s a daily, non-verbal but powerful “language” that flows from the work of God’s hands. The Lord is not just a ruler and an architect. He’s a craftsman, generating beautiful encounters that fire and heal our imagination. C.S Lewis refers to these enchantments as “shafts of glory in the woods of our experience,” and “patches of Godlight.” Perhaps more significant still, our Maker has fashioned us in such a way that we can revisit these past experiences in memory—like recordings, or deposits of Godlight. My aim is not to present an apologetic argument but invite you into an experience of being showered with God’s speech through his creation.

I’ll begin with a memory. I sit down to write, bringing my present into my past, my future dreams and dreads, tagging along. I pass in vivid memory through a tiny village named El Portal, Spanish for “the gateway.” After El Portal, the rolling, tree-covered hills drastically give way to the dramatic, carved terrain of Yosemite Valley. The valley, too, has gates. The sight of them is joy inexpressible and full of glory.

On the south gate, a waterfall called Bridalveil abruptly drops from a hanging valley. The lacey water from a distance appears to move in slow motion but, as I remember, creates a rainstorm up close. On the north side, a stately granite monolith thrust up from thermal places confronts me. This sentinel is known as El Capitan, more than twice the height of the north and south towers of the World Trade Center, which was still under construction the first time I saw it in 1971.

I am summoned to this place where I stand in awe, a place that has dug a raw wound of aching joy in me for fifty years. It has drawn me like a magnet in pilgrimages of body and spirit. I look past the valley gates and survey the continuous and distinct features in the varnished granite on both sides of the valley, each sculpture giving way to another, overwhelming my senses. Not only do these regal fortresses have glorious textures and shapes, but their crystal flakes also glisten with a silvery radiance in the brilliant sun.

At sunset, they simply glow a muted orange, then slowly fade into purple. This deep and wide valley resulted from ancient glaciers, slowly scraping the granite and leaving in certain bands a smooth and glossy polish. I taste the dry air and inhale the fragrant Ponderosa Pines. Close to losing self-awareness, I am pulled out of my anxieties, yet my blood pumps hard. I fall to my knees in wonder and worship. I sing.

Further into the valley and up my favorite trail, I see another waterfall called Nevada, Spanish for “snowy.” It looks like an avalanche as it tumbles over a shorn igneous wall, and crashes over heaps of broken boulders, then over the enthralling mist storm of Vernal fall. At last, it spills onto the valley floor with great violence and flows into the Merced (Mercy) River, which courses west out of the valley gates and through El Portal.

When first came here as a youth, I had just seen the Rocky Mountains of Colorado, but never had I seen such geological massiveness, etching, volume of vertical water, and eminence of light in one place. The beauty was concentrated. I felt as though I was ecstatic. It was the first time I was overtaken with awe and wonder. I was seized with the rapture of Jacob in Genesis when he exclaimed, “How awesome is this place! This is none other than the house of God, and this is the gate of heaven.” My soul passed through El Portal. Imagination on fire! Glory tasted!

That overpowering experience of beauty was in Yosemite Valley happened when I was eleven years old. I couldn’t have put it into words then, but I remember it vividly. Having described what I saw, I will now attempt to relay what the sights did to me–the sensory experience of such beauty.

A visceral joy preoccupied me. I became self-forgetful. My insecurities, which I had just become aware of then, temporarily vanished. I’ve been back to Yosemite at least ten more times and nearly always enjoy it. Though I’ve spent a lot of money attempting to bottle the euphoria, I can’t quite get an encore of that first moment, but the sense of being homesick leads me to the Father of glory, and I worship him.

What goes on in an encounter with beauty? For me, being in Yosemite was not an analysis—it was a sensory experience. Looking at the granite walls, the trees, and the waterfalls caused a bodily sensation, which I guess could be called trembling. But it was more—I was looking at the light interact with the granite, trees, and water, which also combined into a soothing fragrance. I was listening to the wind and the river. I could feel the wind and the firmness of the granite under my feet. While looking at this vista, I was also taking its size and proportion, comparing it to other places.

It was all so effortless and unselfconscious. Unlike responding to a cultural item like a song or piece of art, I did not wonder if it was cool to like it. Even at such a young age, the Valley suggested to me something or someone beyond nature. Someone powerful, yes. But more so, someone who desires that I have pleasure.

Creation “declares the glory of God,” not merely by having features of design, but as a taste, a chance to participate in Eden’s remnants and look for its renewal. God created much more than an argument to satisfy my mind. Instead, he made a visual feast for my imagination—even for my body to digest and relive.

All these years later, I go back in memory and draw from those experiences of beauty in Yosemite. When I do, the peace of self-forgetfulness again washes over me. Hope is kindled for the time of the renewal of all things when the new earth becomes a vast temple, a worldwide garden–God dwelling with us. Seeing his face. God, his people, and his creation flourishing in harmony. Shalom. Such hope is not escapist. It strengthens my resolve to look for ways to
participate in peacemaking now, even with all its limitations and setbacks.

Encountering veiled glory in Yosemite suggests to me a glimpse of far more incredible beauty. It helps me partly imagine and long for what Jesus prayed for on the night of his betrayal: “Father, I desire that they also, whom you have given me, will be with me where I am, to see my glory” (John 17:24).

Because the earth is the Lord’s, and not just a thing, a passive object for scientific study, it plays a music we sense is a riff from Eden’s early days. Just as a painting is not simply spilled paint on a canvas but communicates the painter’s intention and personality, what God has made presents something of him to our senses. Not so much that we are overpowered, but enough to know we are invited.

Sometimes, when I reflect on my spiritual history, what stands out are my plans and aspirations, how I’ve attempted to make my mark upon the world. From that perspective, my past is mostly peaks and valleys, pride and shame. Such remembering shrinks and distorts my life—boasting one minute, the other browbeating my own soul.

Then I realized that year after year, God, through his creation, has been acting upon me with purifying and loving intention. The whole time, in addition to the scriptures and often clarifying them, the breath of Yahweh has been pouring forth speech and music like molten gold through the skies, mountains, the rivers, the trees, birds, and even though his bent image-bearers. “The earth is the Lord’s and everything in it.” No wonder you can hear the trees sing!

The book publishing industry feels confusing, but it doesn’t have to!

Grab a free copy of Brad Pauquette’s guide to the publishing industry. This informative book will break down the major opportunities you’ll find and the scams and red flags to watch out for.